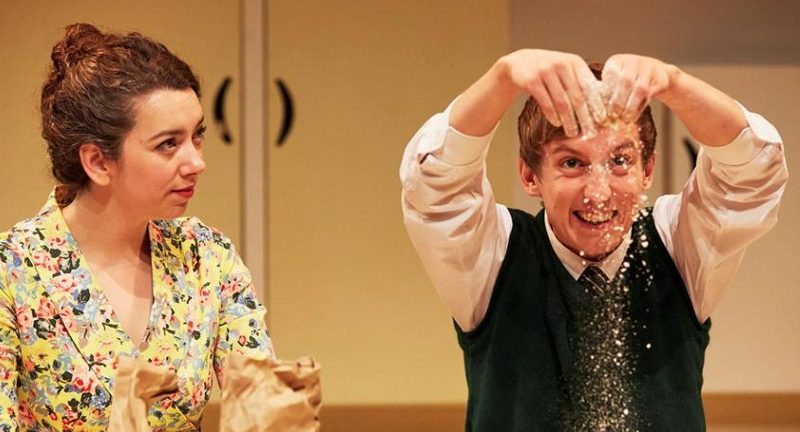 You can almost smell the cakes and pastries being made in the new stage adaptation of chef and food writer Nigel Slater’s memoir Toast. As the young Nigel learns to cook from his mum and Marguerite Patten’s Cookery In Colour, we see them conjure up tarts loaded with lemon curd and jam, Christmas cake and mince pies. The audience even gets to taste some of Nigel’s recipes from flapjack to lemon meringue pie.

The power of Henry Filloux-Bennett’s adaption of Toast is the nostalgia of food. The sight of Nigel helping his mum in the kitchen took me straight back to my own childhood – even the mixing bowl is identical to the one used by my mother all her life. Set in the 1960s and early 1970s, the show is full of references to treats that will bring back memories of youth, from Jammie Dodgers and Angel Delight to Sherbet Fountains and Flying Saucers. A gentle mist drifts from stage left throughout, reminding us this is a memory play, infused with the burnt smoke from Mrs Slater’s toast (although thankfully not the aroma of it).

Following Nigel from age nine to 16 when he became a professional chef, it takes us through the early loss of his loving mum to his father’s marriage to the fearsome but fabulous Joan. Highlights of the play are the intimacy that Nigel has with his mother when they cook together and the fierce rivalry he has with Joan over cooking sponges, Battenberg cake and pavlova. It also traces Nigel’s emerging sexuality, from his early but innocent infatuation with the handsome gardener to his first kiss.

The striking set, designed by Libby Watson, is a stylised evocation of 1960s kitchens, reminiscent of TV cookery shows, especially when Nigel demonstrates some of his favourite dishes. Narrating the story, Sam Newton is engaging as Nigel alongside Lizzie Muncey who is excellent as the women who inspired his love of cooking, from his mum through to his first boss. Mark Fleischmann cleverly balances the conflicts of Nigel’s strict dad, torn between love and resentment, while Marie Lawrence is memorable as the immaculately polished but tough-as-nails Joan.

Director Jonnie Riordan has drawn on his skills as a movement director to introduce choreographed sequences which, while delightful, slacken the pace at times. Filled with humour and sadness, Toast will appeal to foodies but is also a play about loss, evoking the innocent pleasures of childhood and the pain on the road to adulthood.