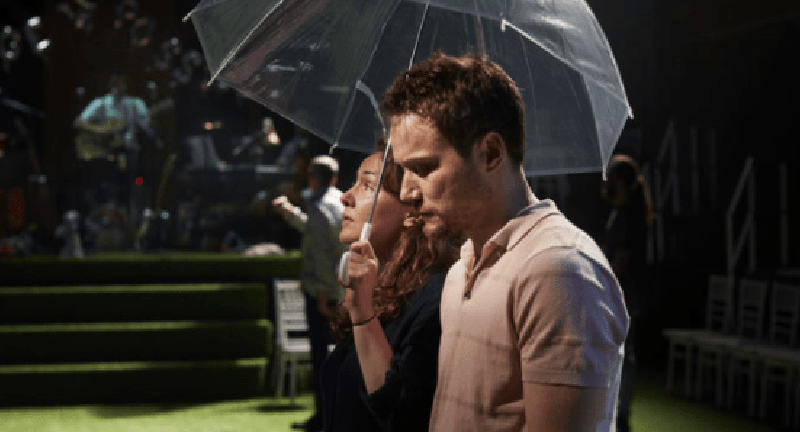 David Greig and Gordon McIntyre have returned to their smash hit “play with songs”, Midsummer, giving it a broader, more visual appeal. Originally staged in the smaller of the Traverse Theatre’s two spaces in 2008, it was a two-hander (co-starring Cora Bissett, now an associate director with the National Theatre of Scotland and creator of this year’s Fringe highlight, What Girls Are Made Of). Interspersed with beautiful, quirky and sometimes funny songs composed by McIntyre, the original Midsummer was an intimate, captivating experience that lingered in the mind with its heartwarming and uplifting energy.

For the 2018 Edinburgh International Festival, they have expanded the staging, turning a much larger space into what appears to be the setting for a summer wedding, with balloons, dressed tables, a glitter ball and a band on a carpet of fake grass. The cast has doubled in size with the original characters, Bob and Helena, now sharing the storytelling with their older counterparts. Inevitably, it has lost some of the intimacy of the original but, under director Kate Hewitt, it is just as charming and enthralling, with the cast making full use of the larger space, including the gallery.

The show is also a love letter to Edinburgh, set in familiar locations around the city from The Meadows and Princes Street Gardens to the Conan Doyle bar. The text has been updated, from emojis to trams (which had only just begun construction in the city when the original play debuted), but it manages to have a strange timeless universality, with references to dates in Bob and Helena’s lives that don’t quite match their ages and the present day.

As the title and Helena’s name suggests, it is a show about magic and romance, with allusions to A Midsummer Night’s Dream. Over a mad midsummer weekend, the pair meet and find a connection that surprises them both, finding solace in each other’s company as Helena tackles her sister’s wedding and Bob dodges his criminal underworld colleagues. As they both face up to turning 35 and “arriving at middle age”, the play asks whether change is still possible as we get older.

It features four strong performances, most notably from Henry Pettigrew as the younger Bob, exuding charisma beneath his aloof exterior. Sarah Higgins is funny and engaging as the younger Helena while Eileen Nicholas and Benny Young bring a mercurial, twinkling spark to the pair’s older selves. With movement directed by Jenny Ogilvie, they make this a beautiful, mesmerising piece of storytelling that makes you fall in love with the show all over again.