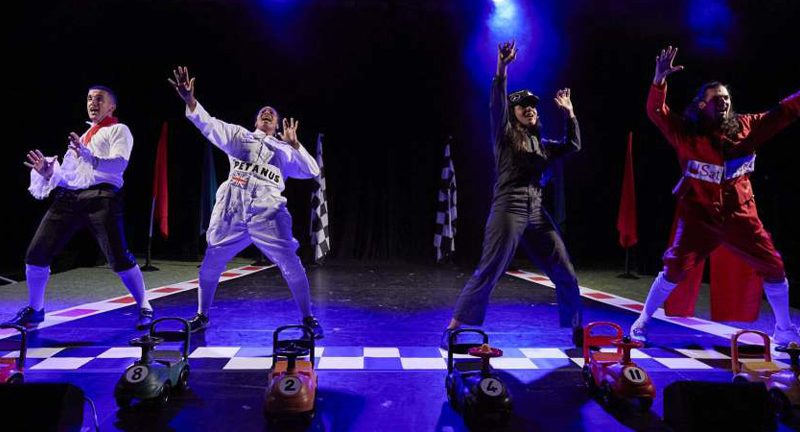 When it was announced that a musical called Hamilton was opening at London’s Victoria Palace Theatre, some people responded (seriously or jokingly) by ridiculing the idea of a show about British motor racing driver Lewis Hamilton. Two years later, and we now have just that: a musical charting the life of the Formula 1 star from his childhood in Stevenage to international success.

As the posters for the new show make clear, this is a parody of Lin-Manuel Miranda’s hit musical and, matching the original’s mash-up of styles, it features a blend of hip-hop, rap, pop and Broadway. But under musical director and lyricist David Eaton, it is not simply a case of forcing new lyrics into existing arrangements but reworking them in a way that is recognisable but different. For instance, the showstopper You’ll Be Back, originally sung by King George III as a threatening rebuke to American revolutionaries, becomes a sadder, wistful song from Ron Dennis, the boss of F1 automotive group McLaren, about losing his protégée to Mercedes. Even the simple catchy chorus of “da da da dat da” is comically transformed to “la di da day” with a melody altered just enough to keep the copyright lawyers at bay.

Written by Fiona English, the story is sometimes a little heavy earlier on with its exposition about Hamilton’s motor-racing career but, even if you have zero interest in cars, the show quickly wins you over with its cheekiness and exuberance. It satirises F1 drivers’ love of branding and sponsorship alongside not-so-subtle humour such as misspelling F1 supporter Petronas as “Pet Anus”. Drama comes from Hamilton’s ongoing rivalry with Spanish driver Fernando Alonso, played with hilarious swagger by Louis Mackrodt.

The whole cast are superb, giving us energetic choreography that must surely come close to what you get at the Victoria Palace Theatre – but with some comedy moves thrown in. Hamilton’s eight-year on-off relationship with Pussycat Dolls singer Nicole Scherzinger opens up the opportunity to add satire on the pop scene, with a very funny performance by Liberty Buckland as Nicole. Along with Jamie Barwood as Ron Dennis, all three take on a variety of roles across the high-octane 60 minutes but the star is Letitia Hector who plays Hamilton with charisma and phenomenal vocals. Not only does this gender-swap casting work perfectly, but it raised a delighted cheer from the audience when she first stepped forward in character.

Directed by Benji Sperring, Hamilton (Lewis) appears a little rough around the edges but this is part of its charm. It helps if you know Formula 1 or the original musical but, even if you don’t, you can’t help being won over by this new show’s irreverent humour, skilful staging and strong performances.