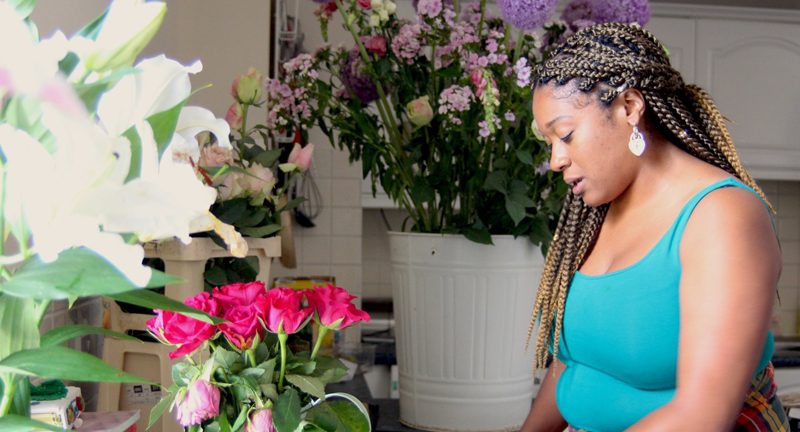 A large apartment on Edinburgh’s Broughton Street has been turned into a performance space by The Pleasance for this year’s Fringe, home to Power Play, a programme exploring gender inequality through immersive theatre. A highlight of the line-up is Emma Dennis-Edwards’ powerful new play, Funeral Flowers, which certainly touches on the programme’s theme but is also a hard-hitting, heartbreaking story of a young woman’s resilience against the odds.

In a brilliantly sustained performance by the author herself, the play presents us with Angelique, a 17-year-old who has embarked on a course in floristry at college while living in care because her mother is in prison. We meet Angelique at the front door of 21 Broughton Street and she takes us up to the kitchen in the second-floor flat where she talks about her life while giving a floristry demonstration. From pink tulips to white roses and sunflowers, the audience of around a dozen people build their own colourful flower arrangement while hearing about Angelique’s mum, her carer and her boyfriend Mickey who “ain’t perfect but at least he stays”.

After this touching start, the story takes a darker turn as we are led through the rest of the flat, from the scene of a house party in the hallway through to different rooms before ending up in her bedroom. Angelique’s trusting good nature is exploited by the men around her, threatening to destroy everything she has built for herself out of her difficult beginnings. In each small space, there is an unsettling intimacy as Dennis-Edwards shares Angelique’s emotional journey, desperately clinging on to her dreams in the face of incredible pressures.

Beautifully written in a poetic but conversational style, Funeral Flowers is an unforgettable, intense experience, skilfully directed by Rachel Nwokoro. Thanks to a deceptively light but deeply moving solo performance by Dennis-Edwards, this is one of the highlights of this year’s Edinburgh Fringe.