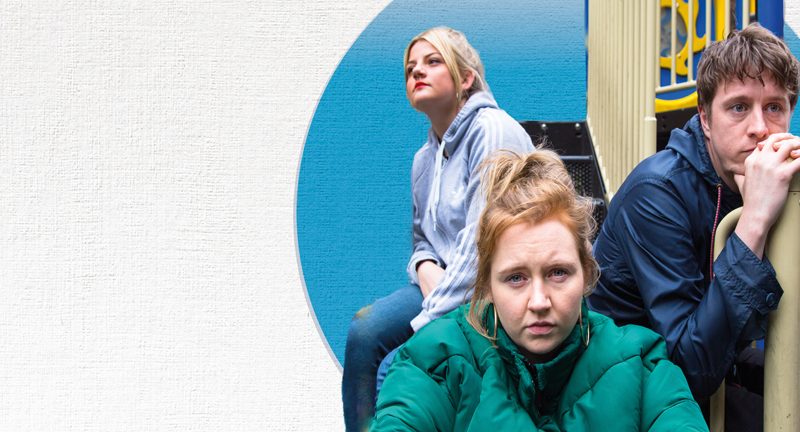 It can be purgatory growing up in a small town. In Simon Longman’s powerful new play, Island Town, the barriers to escape are not just the lack of public transport and money but something deeper that prevents the characters from venturing further than the ring road to the wide open fields beyond.

It focuses on three teenagers who leave school at 16 with dreams and hopes for the future but quickly have to confront the realities of adulthood and the lack of opportunities in a small isolated town. For Pete, he just wants a job and to be a father while Sam wants to get away from her abusive father to have a home of her own. But as the years go by and their hopes start to wither, it is their friend Kat’s dream that becomes more compelling: to jump in a car and get away to anywhere but here.

Despite the bleakness of the story, there is humour in these teenagers’ everyday lives, from Pete’s madcap escapades to Kat’s drunken antics. Tautly directed by Stef O’Driscoll, the show retains an energy and spark that belies its darker matter, celebrating the bonds of friendship that can feel more like home than the place you live. Katherine Pearce is superb as Kat, barely containing her desperate desire to escape her small-town fate, while Charlotte O’Leary is perfect as Sam who already feels defeated by life at 16. Funny and touching, Jack Wilkinson is excellent in his transformation of Pete from a happy, upbeat 16-year-old to a broken, disappointed 18-year-old who feels his life is already spent.

Island Town is a heart-breaking story of lost hopes, set in a place that could be in northern England or Wales based on the actors’ accents but is more universal, more a state of mind. As Sam says, “Even if I wanted to escape, I don’t think I ever could.” But against this sense of an endless cycle of quietly desperate lives, Longman suggests there is a glimmer of hope, that things could be different – and, even if they don’t change, you still have your friends.