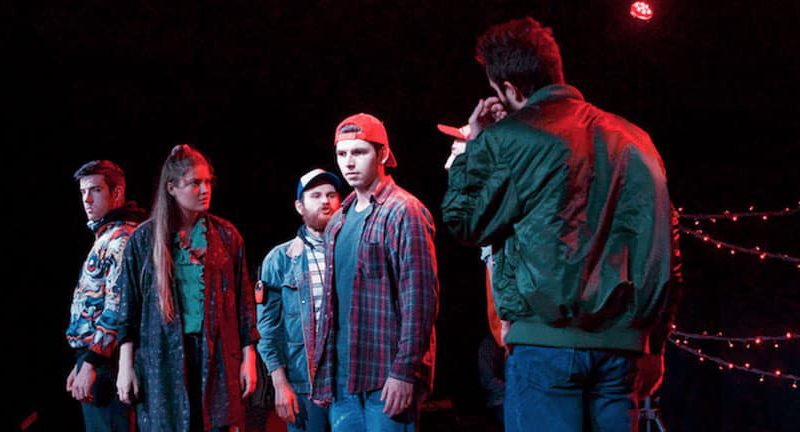 The trolls in Davey Anderson’s timely new play The Abode aren’t the fairytale creatures of Norse folklore but the very real, more dangerous ones of America’s “alt-right”. But this imaginative fable is not just an attack on bigotry and ultra-right extremists but also questions how far the troll hunters on the left should go and if their actions are adequate for tackling the hate.

While the trolls are all too human, the narrative evokes sci-fi fantasy with echoes of classic films of the 80s and 90s from The Lost Boys to The Matrix. It focuses on a battle over the heart and mind of 20-year-old Samuel who lives at home with his mum and holds down a thankless job as a hotel receptionist. With his father long dead, he is lonely and unhappy until he comes upon the chatter of other disaffected men via an old walkie-talkie that belonged to his father. Acting as a metaphor for alt-right online communities, this feeds into his resentment over not being able to get a girlfriend, leading him into a dark, violent world of “straight white men” who hate women, gay people and immigrants. Their figurehead is Ricky, the charismatic founder of the Council of Traditional Citizens, who has established a broadcast frequency called Freedom City – a front for The Abode, conceived as a hallucinatory alternate reality overlying its members’ everyday lives.

But Samuel isn’t the hero of the story: it is half-sister Wendy who sets out to rescue her brother, helped out by a group of anti-Nazi activists. It turns into something of a thriller, suggesting that some people can be saved through hope, optimism and a belief in human goodness. Along the way, the talented young cast of 12, slickly directed by Cathy Thomas-Grant, present a broad picture of alt-right sentiments and liberal reaction, warning that this is an ongoing battle that is more complex than a fight between good and evil.

Despite the dark subject, there is lightness and humour, although some of the biggest laughs come from the absurdities of alt-right rhetoric that are all too horribly true. Clearly based on extensive research, the show provides some intriguing facts about the far right such as white supremacists’ affection for milk advertising, not because of the colour but because lactose intolerance is more common in people of African extraction. It is also bang up to date, referencing aspects of Trump’s presidency and the misogynism of video game players, dubbed Gamergate.

Anderson, who is based in Glasgow, developed the play with the cast – a diverse group of young American men and women – who are students at Pepperdine University’s Department of Theatre in California which has been working with Scottish theatre makers and writers on Edinburgh Fringe shows since 1985. While it is firmly set in the US, it offers plenty that resonates with the rise of the far right in Britain and the rest of Europe.