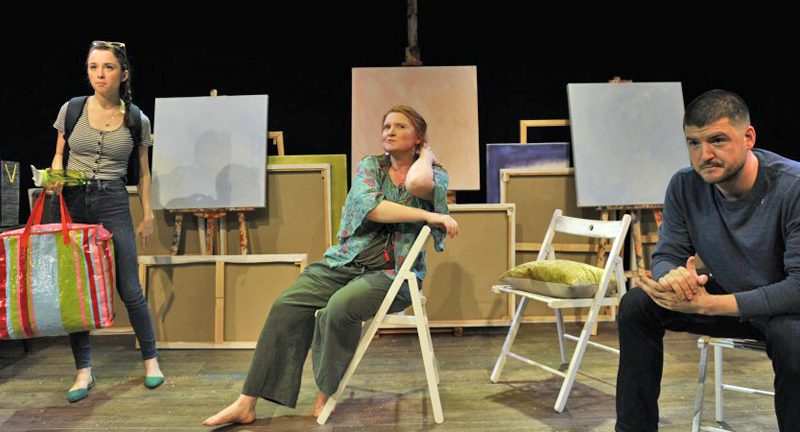 Katherine Parkinson is a busy woman. Currently starring in Home, I’m Darling at London’s National Theatre, she has rarely been off screen this year, from Humans and new comedy series Hang Ups to The Guernsey Literary and Potato Peel Society. Somehow, she has also managed to find time to write a play as part of an initiative by BBC Arts and production company Avalon to encourage creatives to step out of their comfort zone and write their debut. The result from Parkinson is Sitting, a finely crafted story infused with sadness but balanced by some lovely comic writing.

The sitting is being done by three different people in the same studio in front of the same unseen artist for their portraits but, while sharing the stage, they are separated by time across nearly two decades. The overlapping monologues are a delight in themselves, revealing the lives and troubles of each of the characters and exploring the experience of being painted – “the connection between the viewed and the viewer” – but it soon emerges that there may be some other hidden connections.

The show benefits from a touching, heartbreaking performance by Hayley Jayne Standing as Mary, a single mum with complicated relationships but an expansive capacity to love. James Alexandrou is funny as Luke, a young man looking forward to the birth of his first child but anxious about fatherhood. The trio is completed by Grace Hogg-Robinson as aspiring young actor Cassandra, full of hope for the future but hiding her own sense of loss.

Director Sarah Bedi orchestrates the interweaving monologues with skill, allowing the comedy of the writing to shine. For me, the only disappointment was being unable to hear some of Hogg-Robinson’s more softly spoken lines sitting towards the back of the narrow, steeply raked Dining Room space at Gilded Balloon Teviot – one of the pitfalls of the Fringe when going to a popular show after a previous one has overrun. This aside, Sitting is an impressive debut by an actor who has clearly picked up a good ear for comedy after years speaking the words of others.