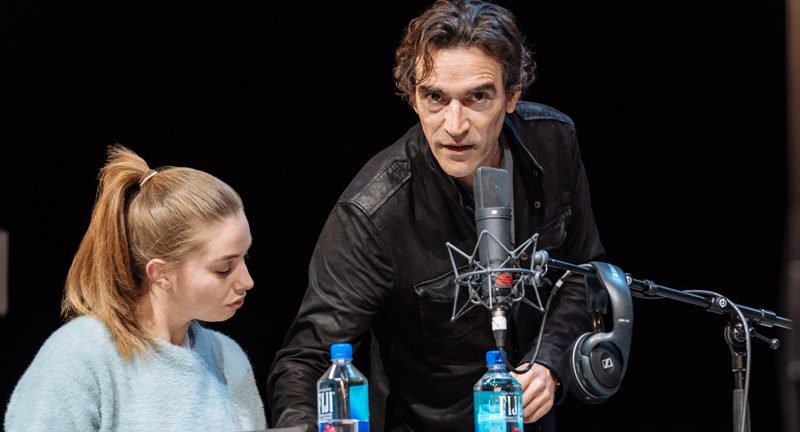 
Anyone who has compared the performance of a new play with the text printed during rehearsals will know how much a writer’s work can evolve once directors, dramaturgs and actors come on board. Scenes can disappear, lines can be replaced and endings can change, making it more of a team effort despite the posters still crediting only the original author. In Mood Music, Joe Penhall explores this collaborative process through the world of the music industry, analysing a dispute over writing credits between a famous producer, Bernard, and a young singer-songwriter, Cat, after they work on an album.

We are given brief glimpses into how they write songs together in the studio, experimenting on keyboard and guitar, but most of the time we see them picking apart their experience with their respective lawyers and therapists, interweaving with each other in an effective abstract style. Bernard is revealed to be charismatic and funny but also arrogant, controlling and emotionally shut-off at the height of his career while Cat is insecure, intense and vulnerable as she finds herself jettisoned into the spotlight while still trying to find her feet.

The play is an entertaining satire on the music industry with plenty of laugh-out-loud jokes and intriguing insights. It asks questions about creative people, what drives them, how success affects them and why so many stars have such damaged personalities. It is very topical in its look at power relationships both in terms of gender and the risks of up-and-coming artists being exploited. Penhall makes no attempt to provide easy answers except to suggest that success and fame can be enemies to pure creativity. At the same time, the play reveals how a synergy of creative minds can produce something superior to one person’s original idea.

Ben Chaplin is perfect as charming rogue Bernard, sharply funny in his inability to show empathy for other people, whether fellow performers or ex-wives. Seána Kerslake is excellent as Cat, capturing the performer’s troubled fragility as well as her ferocious passion for music for its own sake. They are well supported by Jemma Redgrave and Pip Carter as psychologists whose attempts to throw light on the pair’s personalities are ultimately fruitless and unable to get to the heart of what drives such talented creatives. Even more detached from the purity of the music are the necessary evil of the entertainment lawyers, played by Kurt Egyiawan and Neil Stuke.

Pacily directed by Roger Michell, Mood Music engagingly dramatises the legal and commercial pressures on talent and creativity. It may not dig down too deeply but it highlights both the benefits and the drawbacks for any creative endeavour that seeks an audience.