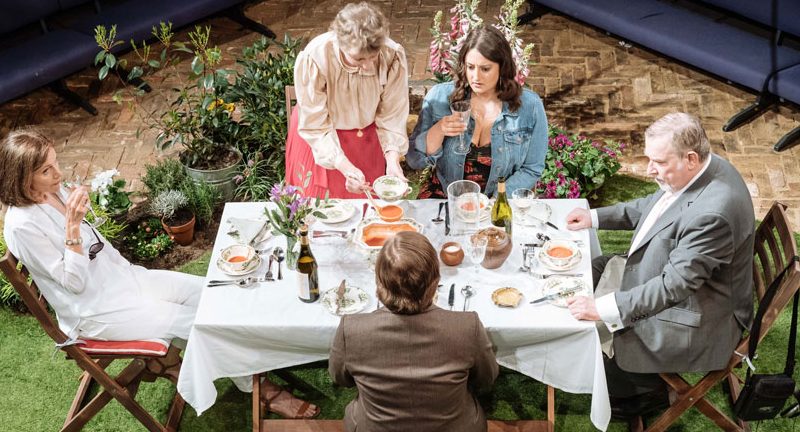 With its blend of family drama, astrophysics and bee-keeping, Charlotte Jones’s comedy Humble Boy was a hit both in London and New York after it premiered in 2001, garnering comparisons with Ayckbourn and Stoppard. With a stellar line-up of comedy acting talent, it has now been revived in a delightful new production by director Paul Miller that deals with death and dysfunction with wit and a warm heart.

The small Orange Tree Theatre stage has been transformed by designer Simon Daw into the lush flower-filled garden of a house in the Cotswolds, where Felix Humble has returned home from a career researching string theory after the sudden demise of his father. Attempting to hide from the world outside, he has to tackle the fraught relationship with his prickly mother, Flora, and other family secrets that have been bubbling away in his absence. Family friend George Pye is suspiciously close to Flora while his daughter was once cruelly dumped by Felix, making clear the play’s debt to the ultimate family drama, Hamlet.

Jones draws loosely on astrophysics as a metaphor for the search for connections and meaning while avoiding some of the more complicated incursions of science and philosophy that make some of Stoppard’s plays such an intellectual challenge. There is literally a buzz about the play, with Felix’s sense of loss focused on the missing bees that his father obsessively cared for. Allusions to bees abound throughout, sometimes to excess, with Flora ruling the home as a waspish queen bee, against a swarming background of music and sound created by Max Pappenheim.

Belinda Lang is well cast as Flora, with a bitchy disdain that elicits plenty of laughs but also hides a deep vein of unhappiness. Selina Cadell shines as her needy, well-meaning friend Mercy, particularly in a brilliant set piece where an al fresco meal of gazpacho spirals into chaos. Jonathan Broadbent is excellent as Felix, expertly treading the line between comedy and emotional meltdown. The ensemble is completed by strong performances from Christopher Ravenscroft, and Paul Bradley and Rebekah Hinds as George and Rosie.

Despite its big themes and allusions, Humble Boy is not weighed down by too much intellectualism, filled with sharp humour and a delight in language and wordplay. Still set in the late 1990s (if my maths is correct), the play remains as fresh as its award-winning debut 17 years ago, veering from broad comedy to touching pathos with dexterity and intelligence.