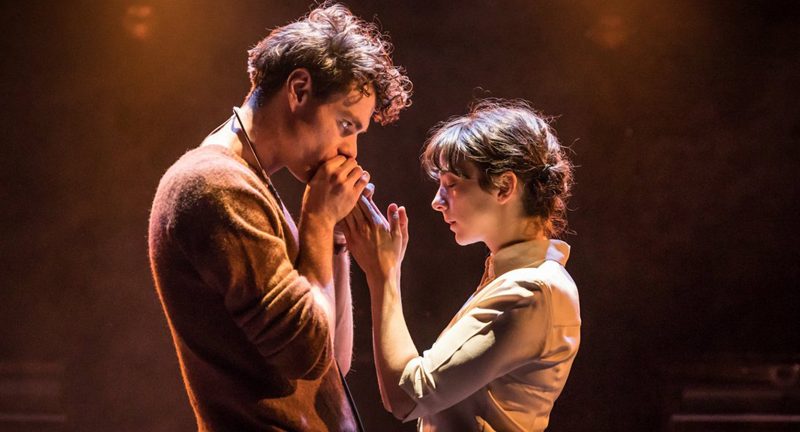 Despite the poetic beauty of Tennessee Williams’s writing, at the height of his success, his dramas were rooted in reality, whether a St Louis apartment or a plantation home in the Deep South. His rarely produced 1948 play Summer and Smoke is set in the small, gossip-ridden Mississippi town of Glorious Hill which, according to the writer’s detailed notes, was to be clearly represented on stage, from American Gothic architecture to a public park presided over by the statue of an angel. But modern directors have been inspired by the fluid, dream-like qualities of Williams’s plays, especially his later work, to take a more abstract approach, which reaches sublime heights under director Rebecca Frecknall and designer Tom Scutt in a stunning new production at the Almeida.

Nine upright pianos, each topped by a metronome, line the back of the otherwise stripped-back set, allowing the cast to provide rich accompaniment to the story through Angus MacRae’s music as well as sound effects as part of Carolyn Downing’s skilful soundscape. With the addition of songs including Portishead’s 1994 hit Glory Box, this becomes more of an ensemble production, more like the community of family and neighbours who move around the two characters at the heart of the story.

Summer and Smoke follows the emotional journeys of music teacher Alma and the boy next door, John, from the age of 10 through to adulthood, focusing on a hot humid summer stirred up by an unsettling gulf wind. They are a poor match: she is the nervous, buttoned-up daughter of a minister, he is the virile, brandy-swigging son of the local doctor, more concerned with the pleasures of the body than the soul. While they are as opposite as anarchy and order, something keeps drawing them together, bringing them close to a connection, but they never both seem to be in the right place at the right time.

Matthew Needham brings a sinewy physicality to John, damaged by the death of his mother at an early age and struggling to find a direction in life. But the stand-out performance is Patsy Ferran whose Alma is a mesmerising ball of barely contained nervous energy, plagued by anxiety attacks where she gasps for breath as if drowning. Inspired by her name meaning “soul”, she is constantly fighting a battle between her inner passions and her determination to be seen as a pure and decent lady. Forbes Masson is excellent as both of their fathers, a doubling-up that neatly reflects how much Alma and John have in common, responding in their different ways to having an absent mother and being children of highly respected members of the community. Nancy Crane avoids sentimentality as Alma’s mother, reduced to child-like behaviour by mental illness, while Anjana Vasan is impressive in a number of roles including Alma’s teenage pupil, Nellie.

The fluidity of the play is taken to the next level, with each scene merging seamlessly into the next, signalled by the sophisticated lighting design by Lee Curran. It adds to the dream-like, poetic feel of the production, at times verging on nightmare, which has such power and resonance that you wonder why this play is not staged more often.