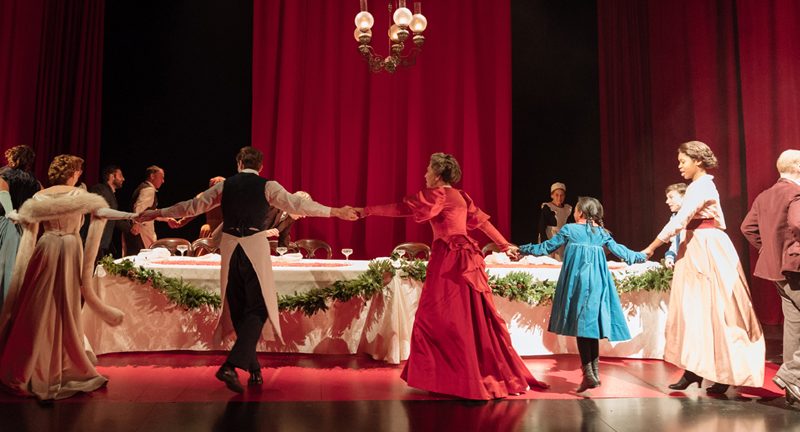 Set in the world of theatre, Ingmar Bergman’s Oscar-winning film Fanny & Alexander is ideally suited to a stage adaption. Inspired by his own childhood, Bergman tells the story of the colourful, glamorous Ekdahl family, headed by theatrical grand dame Helena Ekdahl and her charismatic actor-manager son Oscar alongside his actress wife Emilie and an assortment of colourful relatives. Told mainly from the perspective of Oscar and Emilie’s son Alexander, it celebrates the liberal, affectionate environment that he and his younger sister Fanny enjoy until they are thrust into the cold, moralistic home of a Lutheran bishop, Edvard Vergerus, who becomes their mother’s second husband.

This new skilful adaptation by Stephen Beresford draws on the theatricality of the original story, opening with Alexander’s front-of-cloth prologue to the audience. It is peppered with recurring allusions to Shakespeare, particularly Hamlet, as well as echoes of Ibsen’s play The Wild Duck about the Ekdal family who avoid reality by living in a world of self-deception. The Ekdahls’ world is filled with imagination, stories, magic tricks and marionettes while the bishop’s family is austere and colourless – a contrast beautifully reflected in Tom Pye’s sets, from the rich reds of the theatrical world to the stark featureless box of the bishop’s castle. This is further emphasised by Bergman’s love of food, giving us the menus of significant celebratory feasts, from a sumptuous Christmas dinner in the Ekdahl household to the spare, flavourless offering from the bishop’s family for his wedding to Emilie.

Just as Bergman’s father was, in reality, a strict Lutheran minister, there is an idealised, fairy-tale quality to the children’s upbringing, while Alexander’s anger at God and fear of death is externalised with the typically Bergmanesque appearance of the Grim Reaper himself on stage. However, the play is not a black-and-white morality tale. While the Ekdahls are warm and generous, they are also careless with other people’s lives and feelings, without remorse, putting the bishop’s emphasis on discipline and frugal living in a more positive light.

Ultimately well-intentioned but bullying and controlling, Edvard stops short of becoming a monster thanks to a well-judged performance by Kevin Doyle who brings humanity to what could have been a two-dimensional villain. Catherine Walker persuasively handles Emilie’s switch from being a free-living actress in a family of libertines to the wife of a devout Christian, showing us a woman torn between the two worlds. As Helena, the matriarch of the Ekdahl family, Penelope Wilton exudes warmth and humour, encapsulating the appeal of the glamorous life that Bergman also gave us in his 1955 film Smiles of a Summer Night – the basis of Sondheim’s A Little Night Music. This is complemented by Michael Pennington who brings twinkling charm to Uncle Isak, a family friend and magician. They are among several excellent performances in a large cast, from Jonathan Slinger and Thomas Arnold as Helena’s sons Gustav Adolf and Carl through to Misha Handley in an impressive stage debut as Alexander.

Running at three-and-a-half hours including two intervals, Beresford has tried to capture much of the appeal and detail of Bergman’s five-hour mini-series and the 1982 film version which ran to over three hours. While the visual flair of the original is hard to represent on stage, the production has its own striking style thanks to Pye’s design and Mark Henderson’s lighting. Despite its length, the play never drags under director Max Webster, carrying us along with its alluring combination of drama, comedy and a touch of magic.