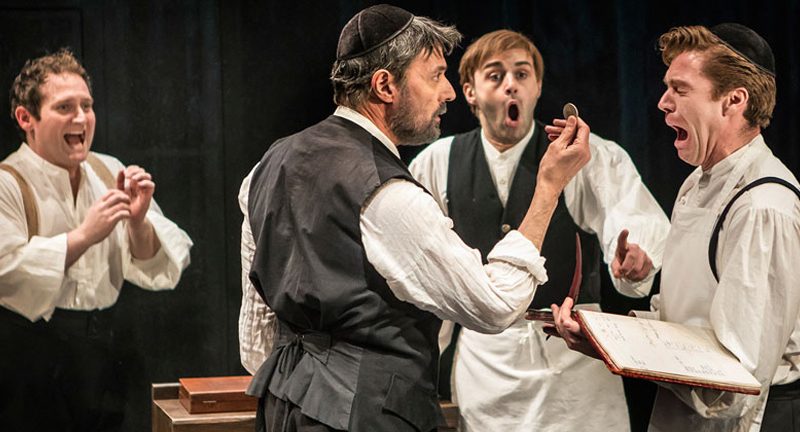 A devout Jewish man dreams of escaping poverty and the oppression of anti-semitism while planning the future of his five children alongside a beloved wife. Bock and Harnick created an enduring masterpiece in Fiddler on the Roof but their later musical, The Rothschilds, was not so fortunate despite its star Hal Linden winning a Tony for the original 1970 Broadway production. At one point, the two musicals were playing simultaneously on the Great White Way and, in their common features, appear like companion pieces. While Tevye could only imagine if he were a rich man, Mayer Rothschild uses his wits to become fabulously wealthy and, instead of five daughters, he has five sons who help him to create a banking dynasty that thrives to this day.

Rothschild and Sons at Park TheatreDespite a rich score and several catchy tunes, The Rothschilds is rarely revived, but more recently, lyricist Sheldon Harnick and the original librettist Sherman Yellen have re-imagined the show as the slightly shorter, tauter Rothschild & Sons, running for just under two hours without an interval. After success Off-Broadway, the show now has its UK premiere, bringing with it Robert Cuccioli as Mayer and Glory Crampton as his wife, Gutele.

Banking and bonds are not a typical subject for a musical, but this show focuses on the human story of a man struggling to escape the institutionalised bigotry of the ghetto for the sake of his wife and children. Going back to Mayer’s early career as a shopkeeper trading in rare coins in Frankfurt in the late 18th century, it quickly charts his rise to being banker to Crown Prince Wilhelm of Hesse and how, by seizing opportunities from turmoil in Europe, he went on to create an international banking empire. The human factor comes in his devotion to Gutele and his mentoring of his five sons to lead the family out of the ghetto through gaining wealth and status.

Rothschild and Sons Park TheatreBankers are rarely heroes in theatre, but in this show, Rothschild and his sons are driven not by unalloyed greed but by a desperate desire to defy the anti-semitism that holds them back and to earn enough money so they can quit the Frankfurt ghetto. On top of this, the writers have seized on a lesser-known detail of the show’s source, Frederic Morton’s biography of the Rothschilds, and highlighted their attempts to use their bargaining power to dismantle the laws that discriminated against Jewish people throughout Europe. The ingrained hatred and distrust of Jewish people at the time is a dark stain that runs throughout the story, contributing to a serious tone that is only occasionally broken by humour.

Although it is not fair to compare the show too much to Fiddler on the Roof, Rothschild & Sons lacks some of the heart and excitement that makes the story of Tevye so endearing. But this production has plenty to compensate, not least the music, here performed by five musicians led by musical director Ben van Tienen. From Mayer’s upbeat songs, “He Tossed A Coin” and “Sons”, to the uplifting “Everything”, expressing the family’s hopes and dreams, there are plenty of charming numbers, with melodies that will stick with you afterwards.

Rothschild and Sons Park TheatreThe cast are flawless, led by Cuccioli and Crampton. Gary Trainor captures perfectly the drive and doubt of Nathan Rothschild who emerges as the most prominent of the five sons when he sets up business in England. Richard Dempsey, Tom Giles, Stephen Webb and Kris Marc-Joseph are equally strong as his four brothers, each individual in their own way but also working well together in both song and movement. Tony Timberlake is excellent as Prince William and Prince Metternich, combining humour with menace, while David Delve is delightful as the Crown Prince’s finance officer and Mayer’s ally, Buderus.

Director Jeffrey B Moss keeps the narrative drive steady throughout and, while the show never fully takes off, the engaging story and strong performances are captivating. For anyone who loves musicals, and in particular the work of Bock and Harnick, this is an unmissable opportunity to discover and enjoy more of their music, beautifully sung by a masterful cast.