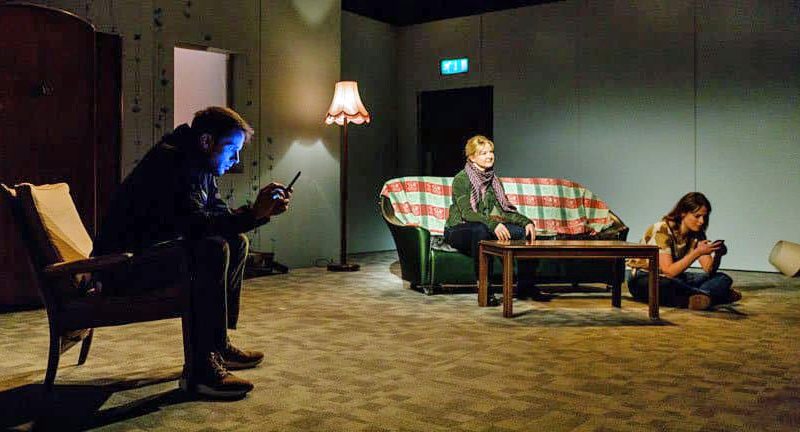 According to the title of Mikhail Durnenkov’s new play, the war has not yet started but, for its disparate characters, conflict is always bubbling beneath the surface. Despite a set of 1970s-style domestic furniture, there are few home comforts in Durnenkov’s unsettling world of paranoia, fear, broken communication and misplaced idealism.

Through 12 narratively unconnected scenes, we meet a variety of people living in an unnamed country which may or may not be on the brink of war and social breakdown. Although written by a Russian, The War Has Not Yet Started could just as easily be Britain in the age of Brexit and Trump although the play’s writing pre-dates both. One scene exploring the nature of “truth” in news reporting is particularly timely. But it is not overtly political, dealing more with the individual experience of living in uncertain times, with vague fears of something cold-hearted and angry lurking round the corner. Human connections are made but are fragile, misguided or misunderstood.

It is an often surreal vision, where thoughts and fantasies mix with reality, accentuated by director Gordon Anderson’s decision to follow Durnenkov’s suggestion that parts are not allocated based on the actors’ ages or genders. In fact, Anderson rarely opts for the obvious choice, with genders switched more often than not, adding to the disconcerting sense of unease as each new scene opens.

The excellent cast of three – Hannah Britland, Sarah Hadland and Mark Quartley – tease plenty of comedy out of this dark, surreal satire, making it as funny as it is intriguing. It is part of Southwark Playhouse‘s mini season of Strange Tales from the West Country after the play had its UK premiere at The Drum at Theatre Royal Plymouth in 2016. While this is a revised production of Noah Birksted-Breen’s translation, with a new cast and director, it certainly lives up to the label of a strange tale.