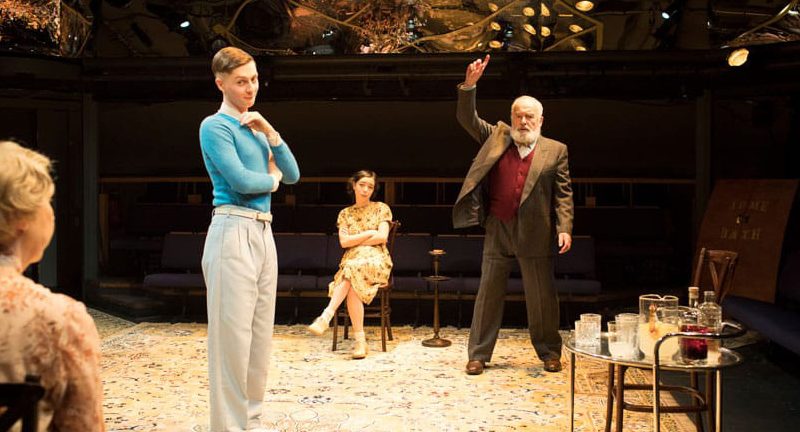 George Bernard Shaw ominously subtitled his 1910 play Misalliance as a “debate in one sitting”, preparing us for a wordy intellectual platform of ideas lacking in theatrical excitement. As the new production at the Orange Tree Theatre demonstrates, the play is indeed packed with words and ideas but, under director Paul Miller, it is a lively debate with some brilliant performances that at times lift it to the level of a sparkling social comedy.

Plot is largely secondary to the many issues that Shaw explores, tackling all manner of topics from class and socialism to marriage, masculinity and the role of women. These are loosely built around the Tarleton family enjoying a Saturday afternoon at their large country house in Surrey where daughter Hypatia is preparing to marry Bentley, the fey son of retired civil servant Lord Summerhays. Things take a rather absurdist turn when a plane crashes into their garden, introducing another eligible bachelor and a female Polish acrobat into the mix just as a mysterious young man bursts in brandishing a pistol.

What happens to them is less important than the wit of the quickfire “debate”. The play is full of quotable aphorisms to rival Oscar Wilde, with the characters delivering their views at a rattling pace that means there is rarely a lull in the conversation. Fortunately, it is kept light and lucid under Miller’s assured direction, with fine comic timing that squeezes every possible laugh out of the text.

Pip Donaghy is superb as the patriarch of the family, peppering his pronouncements with literary citations but never losing the glint in his eye, while Gabrielle Lloyd is hilarious as his devoted wife, the model of good-humoured bafflement at social change. Tom Hanson is excellent as their son, a rugged masculine contrast to the reed-like, simpering Bentley played by Rhys Isaac-Jones. Marli Siu is wickedly good as proto-feminist Hypatia, with Luke Thallon equally impressive as her reluctant suitor who has fallen out of the sky. Simon Shepherd as the urbane Lord Summerhays, Lara Rossi as the outspoken Polish acrobat and Jordan Midsúd as the nervy interloper complete a fine line-up of strong comic performances.

While many of the ideas being tossed about in Misalliance are very much of their time, there are plenty that continue to resonate, most notably the place of women and outsiders in a masculine-oriented society. In fact, there is a surprising freshness and inventiveness that makes it surprising that this is the first major London revival of the play in over 30 years.