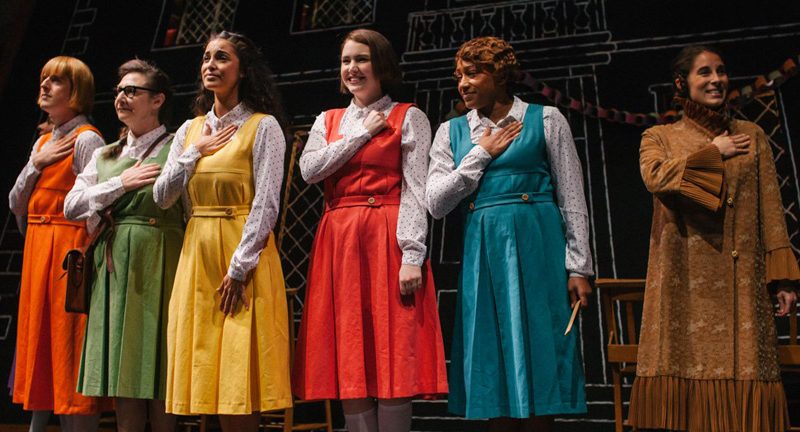 Daisy Pulls It Off ran for three years in the West End (and was one of the first shows I ever saw at the theatre) so it is good to see it revived in this lively production at Park Theatre. While it had a cast of 13 at the Gielgud Theatre (then called the Globe), this new production by Go People has been pared back to just seven actors, as it was when it originally debuted at the Nuffield Theatre in Southampton in 1983. Requiring the cast to double and even triple up on parts, this merely adds to the madcap pleasures of the play.

In writing this masterful parody, Denise Deegan drew on classic children’s stories about intrigue and drama in girls boarding schools from Angela Brazil to Enid Blyton’s Malory Towers which were popular before the arrival of Harry Potter and teenage vampires. Framed as an amateur production by a group of students in the Upper Fourth at Grangewood School for Girls, Daisy Pulls It Off follows the exploits of a group of students at the same Grangewood School for Girls, led by Daisy Meredith, a poor elementary school girl thrust into the elitist world of public schools by winning a scholarship. Classroom politics, hidden treasure and other dramas ensue, told at a breathless, rollicking pace under director Paulette Randall.

Not only is the casting colour-blind but it is also gender-blind, with the one male actor, Freddie Hutchins, in the roles of schoolgirl Belinda Mathieson as well as music teacher Mr Scoblowski – but not the other male character who is unexpectedly played by Clare Perkins. Yet the production goes even further by using “age-blind” casting of actors in their 40s and 50s as teenagers. This gives us the wonderful opportunity to see Pauline McLynn throw herself into a hilarious performance as 15-year-old geek Trixie Martin. She is part of a very funny ensemble, most notably Melanie Fullbrook as admirable headgirl Clare Beaumont and Lucy Eaton who impresses both as tough Irish prefect Alice Fitzpatrick and as fearsome headmistress Miss Gibson. As the plucky and resourceful Daisy, Anna Shaffer is the heart of the show, providing a good-spirited foil for the many other comic performances that also include Shobna Gulati and Freddie Hutchins.

The pared-back set is another triumph, cleverly designed by Libby Watson as a giant blackboard, while Mike Robertson deserves praise for his intricate and quick-witted lighting design that is essential to the fast-paced action, including the most thrilling hockey match you’ll ever see on stage. While the play depicts a world where everything is for the sake of the school and England, don’t look here for any deep insights into Englishness or the class system. While it may poke fun at these values, Daisy Pulls It Off doesn’t pretend to be anything other than a lot of jolly good fun.