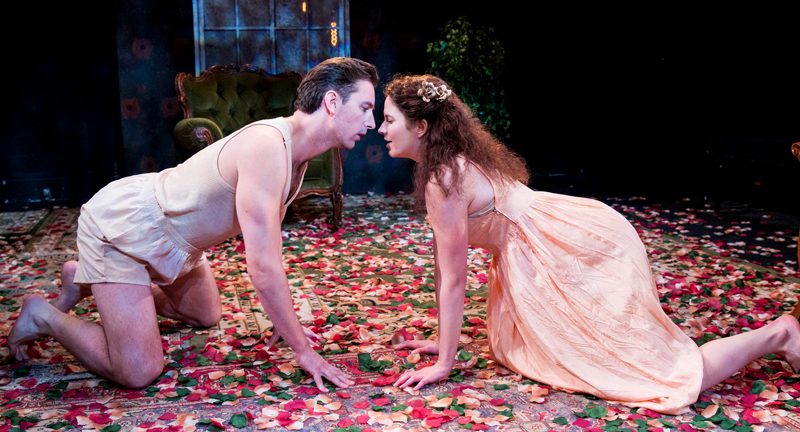 Peter Pan is well established as a Christmas favourite but creator JM Barrie explored alternate worlds in another much lesser-known play, Dear Brutus. First performed in 1917 – more than a decade after Peter first flew into our lives – it has been revived by theatre company Troupe to tie in with the 100th anniversary of its West End premiere. Like Jerome K Jerome’s 1908 fantasy The Passing of the Third Floor Back now at the Finborough, Dear Brutus was a huge hit in its time but, in places, has not aged well. However, director Jonathan O’Boyle has risen to the challenge with aplomb, creating a delightful production that is filled with comedy, tempered by touches of sadness.

The story focuses on eight guests who have been brought together in a country house by its mysterious owner Lob. Along with the butler, it emerges that many of them are haunted by regrets about choices made early in life and, as the midsummer solstice approaches, a magical wood appears offering them an opportunity to explore “what might have been” and understand their true selves – for better or worse. As the title suggests, it examines the truth of Cassius’s line from Shakespeare’s Julius Caesar, “The fault, dear Brutus, is not in our stars but in ourselves”.

Barrie regularly alludes to Shakespeare’s woodland romances, especially A Midsummer Night’s Dream with its partner-swapping lovers and the mischievous Puck who may well still be causing mayhem as the impish Lob. In Dear Brutus, the lovers are the philandering Jack Purdie, his wife Mabel and mistress Joanna Trout, played with gusto by Edward Sayer, Bathsheba Piepe and Charlotte Brimble. Whether it was entirely Barrie’s original intention, their drama is played for broad humour in an overblown style bordering on parody (which will resonate with fans of Round the Horne’s absurd lovers Fiona and Charles). Fortunately, this is balanced by more lightly played humour, most notably from Emma Davies and Miles Richardson as unhappily married couple Alice and Will Dearth. Their dream-like experience in the wood is the heart of the piece, providing the most poignant moments along with touching performances by Josie Kidd and James Woolley as a devoted elderly couple and Venice van Someren as a girl conjured up by the midsummer magic. There is also strong comic support from Helen Bradbury as Lady Caroline and Simon Rhodes as the butler – reminiscent of another Barrie classic, The Admirable Crichton – and Robin Hooper as the elfish Lob.

Without the benefits of CGI, the transition from an Edwardian drawing room to a magical wood is imaginatively achieved in the abstract thanks to the cast and direction as well as Anna Reid’s design, Peter Harrison’s lighting and Max Perryment’s sound design and music – plus a generous sprinkling of multi-coloured petals. With its mixture of magic and comedy, this is an assured revival that offers some entertaining escapism which, although set at midsummer, is a perfect antidote to midwinter.