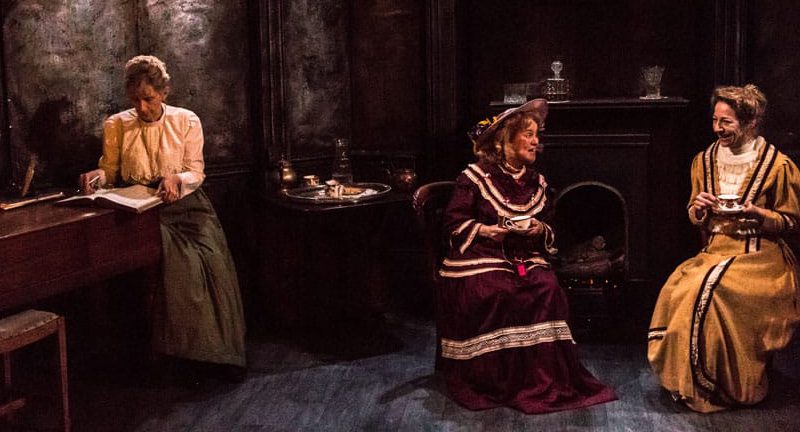 Now best-known for his comic masterpiece Three Men in a Boat, Jerome K Jerome was once also famous for a major West End and Broadway hit, The Passing of the Third Floor Back. After a successful run in London from 1908, it transferred for a year to New York until 1910, starring one of the great classical English actors of the day, Johnston Forbes-Robertson. It is nearly 70 years since it was last staged professionally in London, but it has been revived in a charming new production by NorthSee Theatre.

Set in a down-at-heel boarding house in London, the play is a fantasy – or what Jerome called “an idle fancy” – about a group of middle-class people, artists and businessmen who are down on their luck. Everyone is on the make, driven by the threat of poverty to petty theft, deception and compromising their hopes and dreams, until the arrival of a new lodger in the back room on the third floor. One by one, the other tenants are transformed by his mysterious, angel-like presence to remember their “better selves”.

Admittedly, it is not a great play; as an “idle fancy”, Jerome has created types more than living characters, and it has the predictable structure of a fairy tale. But director Jonny Kelly and the 12-strong cast have breathed new life into it, teasing out the comedy in the writing but without the core premise becoming laughably absurd. There are also some lovely performances such as Graham Pountney as a former army major down on his luck and Paddy Navin as Miss Kite – one of a trio of bitchy lodgers – whose doll-like overuse of make-up is revealed as a touching fear of showing her fading looks. Fresh from graduating from Rose Bruford College this year, Ella Dunlop stands out as the lodging house’s cheeky, warm-hearted maid, Stasia.

The fantasy element is enhanced by harpist Lizzie Faber who soundtracks the transformative presence of the stranger, enhanced by Robbie Butler’s atmospheric lighting design. But the action is very firmly set at the start of the 20th century thanks to Jasmine Swan’s careful re-creation of a boarding house parlour, wrapped in murkily reflective tin-like sheets, and an impressive variety of Edwardian period dress.

In its depiction of boarding houses and its messages about social status, The Passing of the Third Floor Back is very much a product of its time. It celebrates how the down-at-heel can be “ladies” and “gentlemen” through moral behaviour and self-sacrifice and resisting the wickedness of the world. It may not have the power of later fantasies such as JB Priestley’s An Inspector Calls but this is a welcome chance to see this largely forgotten hit of the past, bringing a touch of magic in time for Christmas.