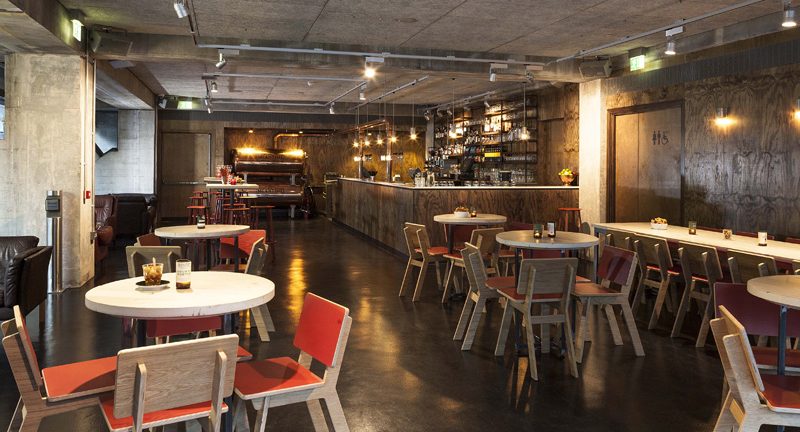 The Understudy has opened as part of the National Theatre’s transformation of its drinking and dining, reports Mark Ludmon for Bar magazine

From front of house to backstage, the National Theatre on London’s South Bank is being refurbished at a cost of £80million. One of the biggest projects was the revamp of its small Cottesloe theatre which, after being closed for 18 months, was reborn as the Dorfman Theatre in November. What was once its stage door – and a cold store and sprinkler room – was also transformed, unveiled as a new bar, The Understudy.

Through architects Haworth Tompkins, cast-offs from the National’s refurbishment have been recycled for the bar’s interior. Tables have been made from old theatre lights, ladders, scaffolding and the cogs once used to turn the drum revolve stage at the Olivier – the largest of the National’s three theatres.

Stripped back to the exposed concrete structure, the walls and the bar are lined with stained shuttering ply – a twist on materials used by Haworth Tompkins elsewhere in the building. With a black resin floor and polished marble-top bar, softer elements include sofas, copper finishes and warm lighting while the ceiling is filled with strawboard to improve the acoustics. “The interior is pared back to the concrete but we also wanted it to be very warm and relaxing,” explains the National’s head of catering, Mark Simpson.

On two sides, floor-to-ceiling windows look out towards the Thames, with a large area for outside seating. The Understudy is accessed from the street, rather than through the theatre, to position it as independent, although there are still announcements when plays are about to start. “The bar was designed to pull in a crowd that might feel less at home in the main foyers,” explains project architect Paddy Dillon, associate director at Haworth Tompkins.

The Understudy is strong on beer and is one of the few places with a tank containing brewery-fresh lager from London’s Meantime Brewing. There are also draught brews from the likes of Fourpure and Redchurch as well as Hammerton, Pressure Drop and Brew By Numbers, and Severn Cider, in bottles. There is also a selection of wines and a short specials menu of cocktails.

Also new at the National is a contemporary all-day café, Kitchen, in the ground-floor foyer, and the stylish House Restaurant and Bar on the first floor, under executive chef Simon Flint. The Long Bar next to the Lyttelton theatre has been shifted to a better location in the foyer and given a more modern design.

Behind the National, a development site is home to a new restaurant, The Green Room, built by the theatre in collaboration with local social enterprise Coin Street Community Builders. Set to operate for five years, it has a creative casual-dining menu, again devised by Simon Flint, plus good seasonally changing cocktails. Designed by Benjamin Marks, The Green Room’s interior (pictured below) also uses recycled materials, including props from hit shows such as One Man Two Guv’nors and War Horse. If you are lucky, you can dine on tables inset with red underpants, artificial carrots or a cross-dressing actress’s fake “willy”.

Originally published in the May 2015 edition of Bar magazine.