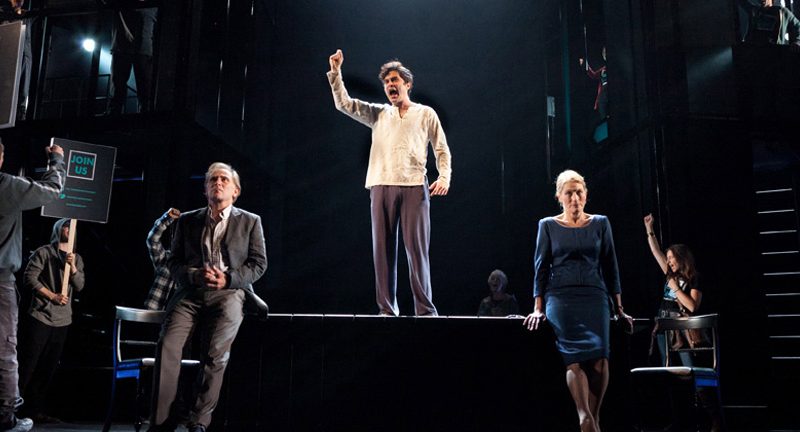 The premise of Mike Bartlett’s latest play, 13, is to present a group of disparate, apparently unconnected people across London who are troubled by an identical terrifying nightmare, but it evolves into an exploration of politics and belief in a secular technological age. The first half presents a multiplicity of characters, from a disenchanted solicitor and a cleaner to an American diplomat and his wife, all literally revolving around a giant black cube that ominously rises and falls in the centre of the large Olivier stage, designed by Tom Scutt.

Slowly, one character starts to unite them – a young political activist, John, who appears from nowhere to preach a secular doctrine of grassroots change. His simple message spreads through Facebook, Twitter and other media, providing an alternative for a population concerned about a Tory-led government taking Britain to war with Iran. The action coalesces into a three-way debate involving John, the Conservative prime minister Ruth and her close friend Stephen, an outspoken atheist academic. Despite the appeal of John’s evangelical ideas, his preachings turn out to have a dark side and are no match for the reality of modern politics.

As part of an excellent ensemble cast directed by Thea Sharrock, Trystan Gravelle is excellent as the quietly charismatic John, and strong performances by Geraldine James and Danny Webb as the PM and the academic save the play from descending into polemic. While the characters’ nightmares are never really explained, the play explores people’s search for something to believe in when times are filled with anxiety and confusion.