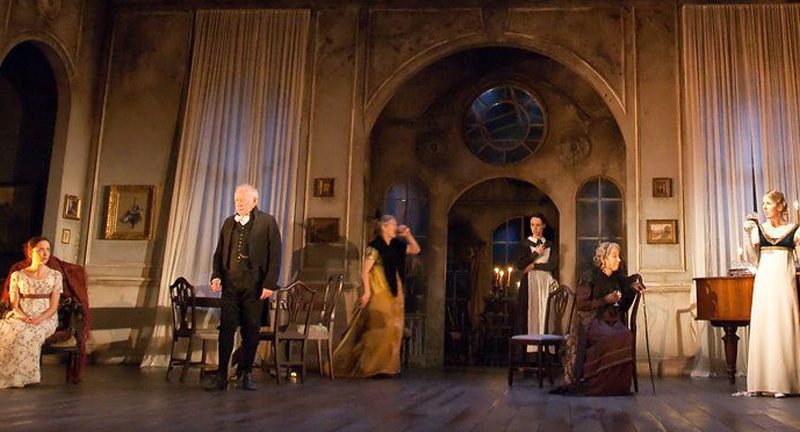 Conor McPherson is best known for his plays about Irish life such as The Weir but, for The Veil, he has gone back to 1822 for a story of social decline and spiritualism. Young British widow Lady Madeleine Lambroke is trying to run a decaying house in rural Ireland and preparing to send her teenage daughter Hannah off to England to marry a marquis. A family friend, Reverend Berkeley, and his laudanum-addicted travelling companion Audelle arrive to chaperone her but end up tapping into Hannah’s latent powers as a medium and lifting the veil between the material and spiritual worlds.

The play entertains with its ghostly thrills and sharp writing but is at times baffling. Recalling aspects of Chekhov’s The Cherry Orchard, it depicts the slow decline of the Protestant landowning classes and uncertainty about Ireland’s future, reflected in the audience’s uncertainty at the end of the play. Directed by the author, the production at the Lyttelton is absorbing and entertaining with strong performances all round, including Brid Brennan as the housekeeper, Peter McDonald as a feckless, violent steward and Fenella Woolgar as Lady Lambroke, desperately trying to hold everything together amid the chaos around her. Jim Norton is an avuncular Rev Berkeley, dangerous in his thoughtless encouragement of young Hannah’s ghost-summoning abilities.

All the action takes place in the drawing room of Lady Lambroke’s house, designed by Rae Smith, with peeling wallpaper and crumbling plaster, overshadowed by tree branches that appear to have already pushed through the roof into the room below. While the play lacks clarity, it captivates with its fantastic cast, the lyrical and often-funny dialogue and moments of chilling tension.