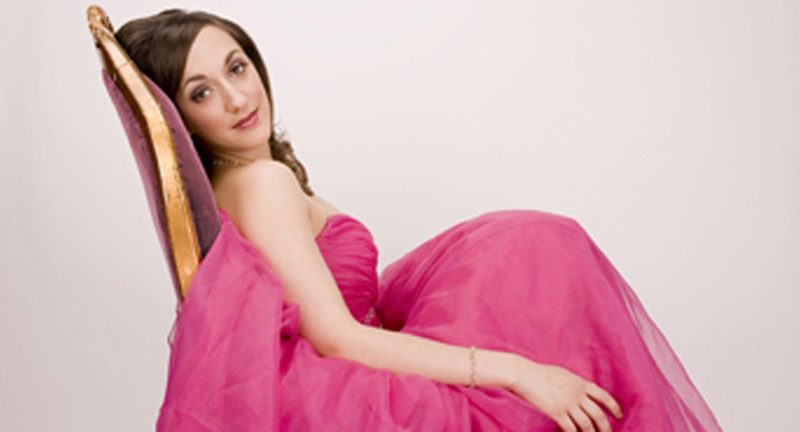 When Helena Blackman burst onto our screens five years ago in the BBC’s search for a Maria in The Sound of Music, she was already a veteran stage performer. She had her first ballet class at the age of 18 months and made her public debut while still a toddler as a fairy in The Nutcracker at the Nuffield Theatre, Southampton. Despite coming a close second to Connie Fisher in How Do You Solve a Problem Like Maria, Helena has gone on to have a successful professional career in musical theatre. She not only starred in the West End premiere of Stephen Sondheim’s first musical Saturday Night but also toured as Nellie Forbush in Rodgers & Hammerstein’s South Pacific, which gained her a nomination for best supporting actress in the TMA awards.

She says that her years of performing in amateur school productions and competing in festivals were “massively important” to her future career. It provided her with useful experience of performing in front of an audience alongside her drama, singing and dancing lessons, culminating in her gaining a scholarship for the three-year musical theatre course at Guildford School of Acting. “The more you can get out there and perform with other people, the better – you get to put everything into action,” she says.”Courses are very academic, so where else are you going to do that? You need to eat, sleep and breathe theatre.”

She particularly recommends that amateur and aspiring performers take part in drama, singing and dancing competitions as she did. “When you are performing with an amateur society, it is difficult to gauge who good you are,” she explains. “But when you start competing in drama and singing competitions with other people in your age group, you can learn how to be better. You can’t get that just from doing show after show. It makes you a more creative and rounded person.” She continues to support the development of young talent through coaching, workshops and judging competitions and also sits on the audition panel for Guildford School of Acting.

Her experience in South Pacific and How Do You Solve a Problem Like Maria was one of the reasons she chose to record songs by Rodgers & Hammerstein for her debut album which was released this year. But her love of their music goes way back. “Like for most children, Rodgers & Hammerstein musicals were always on the telly,” she recalls. “They were the ideal of the musical.”

As an amateur performer, she was involved in Rodgers & Hammerstein productions at Swanmore Secondary School in Hampshire, including Maria in The Sound of Music and Anna in The King and I. “They had fantastic amateur drama there,” she adds, recalling how she played Dorothy in a school production of The Wizard of Oz at the Kings Theatre in Southsea, Portsmouth, in front of nearly 1,000 people when she was only 12.
Along with the album’s producers Speckulation Entertainment, Helena also felt it was time to look at Rodgers & Hammerstein’s music anew. “People haven’t recorded their songs for a while and it’s been the older performers who have done most of the recordings. There have been a lot of people bringing out new writing but this meant there was a little hole in the market for the traditional stuff that we all know and love. So many of the songs are about love and it’s still very relevant today.”

New orchestrations by Michael Bruce, Simon Hale, Tom Kelly and Chris Walker have given a new spin on many of the familiar hits. “All the songs have been reinvented but that wasn’t necessarily what we set out to do – we just looked at each song and how we saw it,” Helena explains. “We still wanted them to sound like Rodgers & Hammerstein and pay attention to the words. We didn’t just want to be different for the sake of it. We were trying to be truthful to the songs. We didn’t want to lose the purity of them.”

The album features plenty of well-known tunes from musicals including The Sound of Music and South Pacific but also pulls out some less familiar songs such as The Gentleman Is a Dope from Allegro which has never even been produced in London. Helena also duets with Jonathan Ansell, formerly of pop-opera group G4, and Daniel Boys, who has also gone on to a successful stage and recording career after being a contestant in the BBC’s search for a Joseph.

Helena hopes the album brings Rodgers & Hammerstein to a new and younger audiences who maybe think their music is old-fashioned. “We have made it more accessible,” she says. “People are saying it is so fresh and vibrant and that they didn’t expect it to sound like that.” The album has certainly gained great reviews, such as The Times which said: “Helena Blackman’s voice soars to the yearning high notes, and yet she is not afraid to sing in the softest whisper. Every word is clear and cuts to the heart.”

When I meet Helena over a mocha coffee in south London, she is about to head up to perform at The Sage in Gateshead in a Singalongashow with Daniel Boys and the 50-piece Northern Sinfonia. Her next gig will be a solo acoustic session at The Pheasantry in Kings Road, Chelsea, London on Sunday June 12 where she will perform a few Rodgers & Hammerstein songs plus some other favourites.

But she is keen to be back in a stage show and, after we say our goodbyes, she is off home to prepare for three auditions over the coming days. She says it is exciting to see so much new musical theatre coming through, albeit mainly at smaller London fringe theatres. Her most recent production was a year ago in Tim Sutton’s new “play with music”, The Secret Garden, at West Yorkshire Playhouse in Leeds. She also performed in the show A Spoonful of Stiles & Drewe, which was released on CD by Speckulation and featured songs now being heard in the West End production of George Stiles and Anthony Drewe’s Betty Blue Eyes. Helena is also a fan of young composers Michael Bruce, Steven Luke Walker and Denise Wright and believes the time is right for a return to “epic musical theatre” on the scale of Andrew Lloyd Webber or Rodgers & Hammerstein. “We definitely have the space for big English musical theatre.”

Originally published in the May 2011 print edition of Amateur Stage magazine.