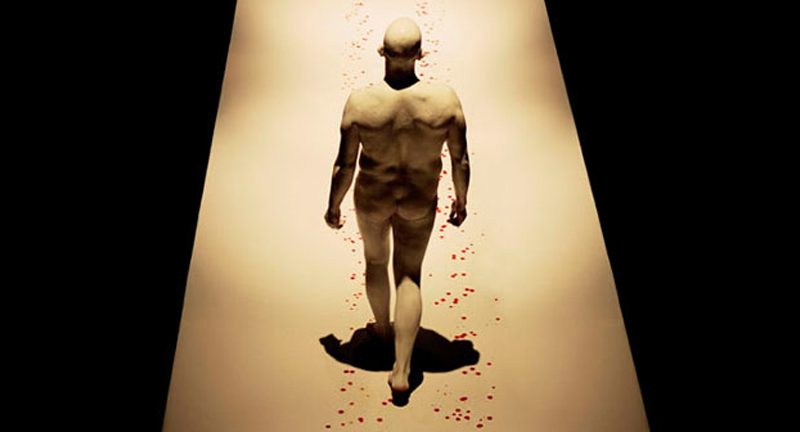 
Franko B sits in an East End cafe and admits, “I set myself up as a monster.” But the Italian-born artist, whose performances involve letting blood seep from his veins, explains he is not thinking of the modern meaning of the word “monster” but harking back to his Roman ancestors. “I mean it in the Latin sense, monstrare, someone who shows themselves,” he explains. “In my work, I am setting yourself up to be looked at.”

Franko has been using his body as a bloody canvas for eight years, earning international acclaim for his disturbing, unforgettable performances. His most recently performed live piece, I Miss You, was the high point of the Live Culture season at London’s Tate Modern in March this year. For 15 minutes, Franko walked up and down a catwalk-like canvas, naked and bleeding. Most people were captivated into silence, others were reduced to tears.

His work has attracted all kinds of reactions. There has been the predictable knee-jerk response from the media and politicians – the Conservatives’ culture spokesman, Tim Yeo, attacked the use of public funds for one of Franko’s performances, while an event last year attracted a lone protestor waving a sheet of foolscap proclaiming, “Stop this show now: self-harm is not art.”

Audience reaction has been varied, with people fainting or walking out. In Aktion 398, individuals shut themselves in a room, one-to-one with Franko, who sits in front of them with a deep scratch across his stomach. Some people just chat politely or spout poetry at him, although one woman stripped off and urinated in front of him.

“I get very different things from different people,” Franko says. “Sometimes it is positive and sometimes it is not. Their reaction is more to do with them. You are just a vehicle. You are catharsis. People come up to me and tell me, I felt this or I felt that, and it’s fine by me. If they ask me if that was my intention, I say, no, that was not my intention. It was yours. I’m not interested in whether they are wrong. It is to do with their desire, their stupidity, their intelligence.”

For Franko, it is “about being vulnerable but without losing your dignity”. It is also about making a difference. “To me, there are two types of art. One you are going to remember and one you’re not going to remember, one that touches you and one that doesn’t touch you. It has to be able to make you travel, not just escape – make you travel into another world or situation or reality. Most importantly, I want to make work that is important to me. If people remember, it’s good.

“My belief is that I have a responsibility to contribute to the society that I live in, to contribute regarding things that I care about and I believe in – discrimination, bigotry, oppression. We are political. We can’t sit on the fence. People who sit on the fence are the worst. They are more responsible for things that are happening because they don’t do anything about it. They are responsible for the mediocrity of the status quo.”

Franko describes his work as “visceral” where the body is “an unmediated site for the representation of the sacred, the beautiful, the untouchable, the unspeakable and for the pain, the love, the hate, the loss, the power and the fears of the human condition”. During his performances, his body is painted white but, off-stage, his glorious, colourful tattoos across his body make him a living work of art.
With typical modesty, Franko insists he is working within a long tradition of using the body as a canvas. Inspiration has come from other performance artists whose work has featured self-wounding, such as Marina Abramovic and Gina Pane. “I moan when people say that I’m unique,” he says. “I don’t think I’m unique. I don’t want to be. There’s a history of people who use a body as a canvas as a set of presentations and representations of what affects us – pain, love, lust, desire.”

Aged 42, Franko saw many of the extremes of the human condition growing up in Milan. Brought up in an orphanage, he was educated in a Red Cross school – the red cross motif occurs in much of his early work as well as the tattooed art on his body. After a few years living on the streets, he came to Britain in 1979, aged 19. Until then, he had never considered being an artist. “I was too busy surviving,” he explains. “When you are young, you find it difficult to articulate. But you change and grow up.” He took a foundation course at Camberwell College of Art in south London and then studied fine art at Chelsea College of Art. In the late 1980s, he began to think about expressing his artistic vision through his own blood. “I am inspired by life,” he explains. “I see people bleeding every day.” He was backed by the champion of British live art, Lois Keidan, when she was at London’s Institute of Contemporary Art and he gave his first live performance at the ICA in 1995. “At the very beginning, I felt totally dizzy and could not get up afterwards,” he recalls. “People didn’t see this. This was when I used to get people to go out before I got up. I had to wait for the blood to go round. I couldn’t do a quick exit. Most of the people who knew me would worry about me.

“When I did the first bleeding in public at the ICA, that was when I realised I had turned a corner. I realised I couldn’t turn back. I also felt I’m in trouble now, what can I do now that would matter so much. Once you have bled, what do you do next? Open your chest?
“My philosophy has changed. Early on I wanted to think I was interested in pushing myself to the limit, to survive the performance. I realised that wasn’t necessary. The performance could stop any time I wanted it to, so it was no competition, whether it was half a litre of blood or a whole litre of blood.

“After a while, I realised that it wasn’t the quantity that was interesting for me, it was the quality. I felt that it was better for me to be in total control rather than losing control. If you want to lose control, you can just take lots of drugs. It is important for me to stay 100 per cent focused.”

Franko has also been working in other areas, such as video, photography, painting, installation, sculpture and mixed media. For his project Still Life, he has been photographing people sleeping in the streets of London and, earlier this year, made life-size cut-outs of the images and placed them in public places where the real-life people would be moved away, such as outside the Bank of England, the Stock Exchange and Tate Modern. He also uses the bloodied canvases from his performances – and the baby wipes for mopping up the blood – to create paintings and sculptures. “I perform work with bleeding still, but less and less,” he says. “I have started to bleed in the studio on the canvas for painting and installations.”

Initially, Franko worked in the living room of his home in Brixton, but for the past four years, he has had his own studio tucked away in the bowels of the Toynbee Studios near Aldgate, east London. To find him, you go through a service door and down a steep narrow staircase to a bare, basement corridor. You duck under a five-foot-high hatch and emerge in a large high-ceilinged room packed full of Franko’s work.

His newest paintings are piled up against one of the walls – blood-splattered cloth cut into the shape of flowers or people and pasted onto canvas. These works, such as I Will Help You With the Pain, mark a new phase in Franko’s career. “Flowers are a symbol of positivity,” he explains. “People saw my work as being not very happy. The new work is still about the same things but it’s more optimistic. It’s just that when you are younger you tend to be more cynical. But you can’t live thinking you are dying.”

In another part of the studio is a clothes rail carrying suits made out of the canvases from Franko’s performances, created by clothes designer Walter Van Beirendonck. Elsewhere, there are all kinds of domestic objects from a wheelbarrow and shoes to a tea set and a broken bike, all wrapped in canvas smeared with brown-dried blood. He has been working on these since the start of this year and hopes to see the results exhibited at Tate Liverpool later this year. “It’s about giving life to things that have been hurt,” he explains.
Despite the visceral nature of Franko’s art, this tenderness runs through much of his work. He has used titles such as I Miss You, My Heart Is Yours Do You Want It, and I Feel Lonely Please Call Me – some of which have blazed across the night in the form of red neon signs. A tattoo on his right hand states simply “blinded by love”, while he says his current favourite phrase is: “My heart is broken”. It reflects the vulnerability of the artist whose bloodied works and performances ought to be ugly but aren’t. “My work has to be beautiful,” he says. “To me they are very beautiful.”


Originally published in the September 2003 print edition of Soloarte. Picture from Franko B